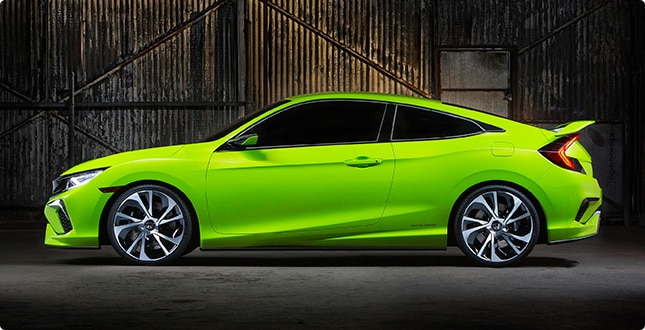 The 2016 Civic is almost here! It is expected to arrive in early November, and with it comes a lot of fun changes! But what makes the 2016 Civic different than the 2015 model?

LaneWatch blindspot display, HondaLink the Next Generation, and a multi-angle rearview camera can all be viewed and controlled through the 2015 Civic’s 7 inch touchscreen display. See the image above for the 2015 Civic’s dashboard design.

The 2016 Civic (shown above) has gone through some aesthetic tweaks, but the metalwork is the same as the previous year. The most significant difference with the 2016 model is the amount of variation in trim levels and design options. The 2016 Civic is available in a sedan, coupe, Si, hatchback, and Type R. Trim levels include the DX, LX, EX, EX-T, and Touring. Speculated paint colours include Taffeta White, White Orchid Pearl, Crystal Black Pearl, Modern Steel Metallic, Rallye Red, Lunar Silver Metallic, Aegean Blue Metallic, Cosmic Blue Metallic, and Burgundy Night Pearl.

The 2016 Civic’s dashboard (shown above) comes with the familiar 7 inch touchscreen display, which is compatible with Apple CarPlay and Android Auto. Honda Sensing will also make a return on all trim levels except the DX. This model has 91 litres of additional interior space compared to the previous year. Trunk space has also been increased by 75 litres. The 2016 Civic has two available engine options; a 158 horsepower, 2.0 litre, 6-speed manual, and a 174 horsepower, 1.5 litre, turbo CVT.

SAFETY NOTICE: All departments are open while respecting the Provincial 50% capacity limit. No appointments are necessary. Mandatory face masks required in dealer, as per City of Ottawa bylaw.