Since we last spoke about the 2015 HR-V, details and speculation about the upcoming North American model have been flowing!

The 2015 HR-V is expected to be released in the late winter of 2014. So far, this “urban SUV” has been marketed as a vehicle that a first time, or long term Honda driver will love. It is expected to have the same 1.5L 4-cylinder Earth Dreams engine as the recently released 2015 Fit. A six-speed manual and CVT transmission should both be options for the HR-V. Also borrowed from the Fit will be the infamous Magic Seats.

Even though it has been described as an “entry-level” SUV, Bluetooth connectivity, a rearview camera system, and LED break lights should all be standard features on the 2015 HR-V.

To fill in the blanks about what isn’t known about the HR-V, car critics have looked at similar models from around the world. The HR-V is said to be the North American version of the Japanese Honda Vezel. The Chinese version of the HR-V, called the XR-V and the European HR-V have also helped fuel rumours as to what could be seen next.

The XR-V (shown above), was recently unveiled at the Chengdu Motor Show. It is also a Fit-based SUV, and has been said to be similar to the Japanese Vezel. The aesthetic differences with the XR-V are the most noticeable. This version of the HR-V features a more angular design on the grille, with grey tones on the bumper. The interior also has a unique look, with circular shaped air conditioning vents. 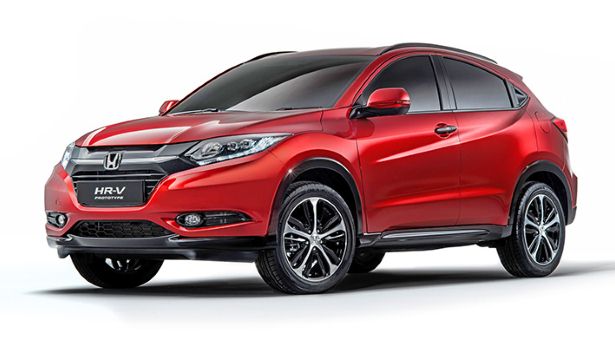 The European version of the HR-V (shown above) looks more similar to the North American version so far.  The HR-V has been a part of Honda’s European lineup since 1998. It is based off of the Honda Jazz, and also features the popular Magic Seats. The latest European HR-V comes with either a 1.5L 4-cylinder engine (in manual and CVT transmissions), or a 1.6L i-DTEC diesel engine.

The North American HR-V is said to be the most similar to the Japanese Honda Vezel. The latest version of the Vezel (shown above) is said to be as practical as an SUV, but with the styling of a coupe. The interior has been described as being similar to the North American Honda Civic. The Vezel, however is known for its spacious interior. Not only does it have the infamous Magic Seats, but it features a centre tank layout, to maximize legroom for backseat passengers. All together it can hold 453L of cargo. The 2015 Vezel comes in CVT transmission only. The hybrid trim is the first of Honda’s hybrids to feature Real Time All-Wheel Drive.

What do you want to see with the 2015 HR-V? Let us know on the Dow Honda Facebook or Google+!

If you are looking for a different kind of vehicle, don’t forget that the 2014 Model Clearout is on at Dow Honda!